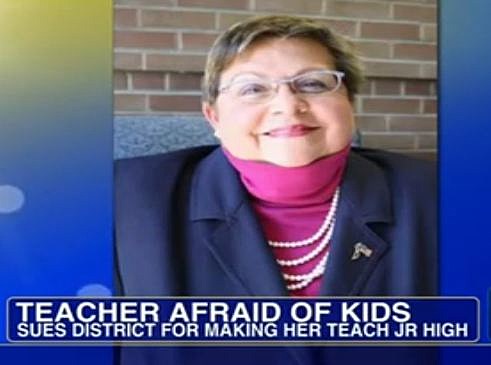 A junior high school teacher, or former teacher I should say is suing the school district for apparently discriminating against her because she has pedophobia a fear of young children. But, now here’s what’s happening.

Maria Waltherr-Willard, 61, had been Languages in Cinicinatti for over 30 years at the junior-high school level. So how exactly, has she suddenly developed a condition for the fear of children? When she in the presence of the little energetic rugrats she experiences symptoms which include anxiety, chest pains and vomiting.

When she brought this up to the school district, they decided to move her to the high school where hopefully, being around a more mature (as it can get) environment would help the situation.

Well the next problem that sent Williard’s blood pressure through the roof was that the district decided to replace her language classes with online classes, causing her to be out of a job. She took this as discrimination due to her phobia and now she wants to sue the school district.

Due to the stress of being surrounded by young faces and the new situation with her job, her blood pressure became dangerously high and was forced to retire. Now, suing the” Mariemont School District for discriminating against her based on age, gender and her phobia”, according to CBS.

So far a Federal judge has thrown out three of accusation, and the hearing is postponed until 2014. What do you think though? I feel bad for her and her situation and especially because she can’t help it but, is suing the right answer?

Woman Abducts Child From Classroom, Pretends To Be Mom
Filed Under: kids, teacher
Categories: National + Global News
Comments
Leave A Comment
WNY Michaels Locations Doing Multiple FREE Craft Activities For Kids
Scary Data Shows How Many Car Accidents Happen on Halloween
A Tough Dilemma + Decision We Have To Make As New Parents
What’s the Legal Age to Leave Kids ‘Home Alone’ in New York?
Santa Set To Visit The Buffalo Zoo To Have Breakfast With The Kids
Save Your Dollars. Here is Where Kids Can Eat Free
Peyton Kid Changed His Jersey From ‘Manning’ To ‘J. Allen’
Back To School Time Means Busy Roads, Excited Kids
Here’s Why Everyone Is Commenting ‘Nah he Tweakin’ Under Celebrities’ Instagram Posts